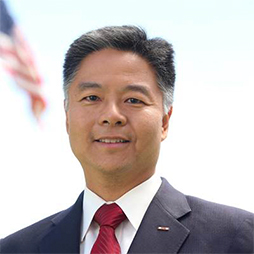 
Ted W. Lieu was elected to California’s 33rd Congressional District in 2014. Today he serves on the House Judiciary Committee and the House Foreign Affairs Committee. He is a former active duty officer in the US Air Force and currently serves as a Colonel in the Reserves. In Congress, Ted has established himself as a leader on protecting the environment; Social Security and Medicare; civil liberties; and veterans.  He has been a leader in Congress against ethnic and racial profiling, and discrimination against the LGBT community.  He serves as Chair of the Congressional Asian Pacific American Caucus task force on armed services and veterans, Co-Chair of the LGBT Equality Caucus, and Co-Chair of the Cloud Computing Caucus.

He has been an outspoken proponent for tackling climate change.  The first bill Ted wrote and introduced after coming to Congress was the Climate Solutions Act, which aims to make California’s ground-breaking renewable energy goals and climate emissions reduction targets a national model.

As one of only four computer science majors currently serving in Congress, and as a member of the House Oversight and Government Reform’s Subcommittee on Information Technology, Ted is frequently sought out for his insight on technology and innovation matters including cybersecurity, cloud computing, and innovation as well as the sharing and creative economy.

A graduate of Stanford and Georgetown Universities, he received degrees in Computer and Political Science and a law degree. He was Editor-in-Chief of the law review and also received four American Jurisprudence Awards.